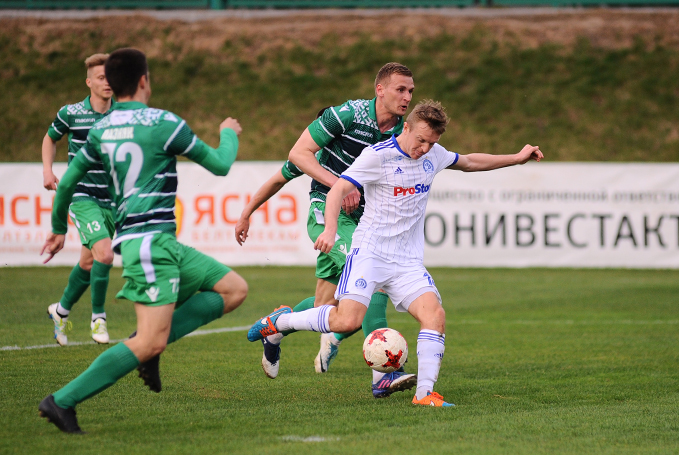 "Dinamo-Minsk" wins in the first away match of the season

"Gorodeya" when it plays in its native walls is always a tough nut and uncompromising opponent. "Dinamo" knows it for sure. In all previous four matches in Haradzeya "Dynamo" never won in regular time and never even scored from the game!


Sooner or later every series, even the most pleasant or unpleasant, comes to an end. And "Dinamo" did not postpone it (to score and to win) "for later".  From the first minutes it took the game under its control, wholly owning the game and territorial advantage. The hosts did their best to stop the offensive rush of the blue-whites but not succeeded. "Dynamo" persistently attacked the goals of the hosts and on the 25th minute Artsiom Salavei received a transfer from Makas and did not hesitate to hit the near corner - 1:0!


This time usually uncompromising Gorodeya looked not very convincing in the attack. From time to times the hosts were creating some tension at the goals of Harbunou, but actually didn't have any truly scoring chances.


And Dinamo at the end of the match scored its second goal. And this one was really brilliant and is likely to be recognized by specialists not only as a goal of the Matchday but also as a goal of the month. After a series of one-touch passes and transfer from Uros Nikolic our forward Uladzimir Khvashchynski entered the penalty area of the hosts at a fairly sharp angle and hammered the ball into upper right corner. Goalkeeper Mikalai Ramaniuk did not even expect such a hit.


As a result, Dynamo wins the first in the season away victory and after MD-3 has 7 points in the standings. Uros Nikolic with three assistant points leads the list of the best assistants of the championship. Way to go!


The next match "Dinamo" will hold next Saturday at FC "Minsk" stadium in Minsk. Our opponent - FC Gomel.
We invite all fans to the match! Tickets are already on sale!