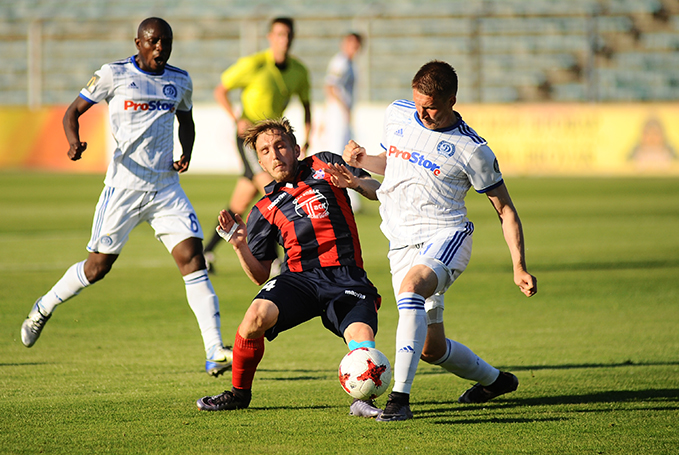 "Dinamo" shows the character and will to win, scoring the decisive goal on the 90th minute!

On the first day of summer, on the International Children's Day which is celebrated all over the world today, an impressive audience gathered at "Tractor" stadium. FC "Dinamo-Minsk" on the occasion of the holiday allowed all children under 16 years to come to the match free of charge.

Already in the very debut of the match cheerful audience to its surprise almost witnessed a goal in the net behind Andrei Harrbunou. Fortunately it was only "almost". Dzmitry Antsileuski, probably, did not expect a very long cross to the penalty area and hesitated ... It was the third minute of the match.

Dinamo responded very fast and three minutes after  Khvashchynski could have scored after corner free-kick, but his head shot was a bit wide. It seemed that Uladzimir was push right before the shot, but the referee of the match didn't notice any fouls.

"Dinamo" quickly took the initiative and territorial advantage. Our team was methodically shattering the defense of the guests. But unfortunately we didn't see any goal in the first half.

Dinamo started the second half also very actively! First, Khvashchynski lost the running duel to the opponent's goalkeeper Veramko who knocked the ball out from under the attacker's legs.

And then Anton Saroka rushed face-to-face with the goalkeeper of the guests, but also lost this micro-duel.

"Dinamo" continued to attack, but at some point the attacks of blue-whites lost their sharpness. And the guests had few good counterattacks, even making Harbunou saving its team in to very dangerous scoring moments.

It seemed that the match would end in a goalless draw, what could be a good results for our guests. They showed this using each opportunity to delay the playing time ... Unfortunately the referee, for some reason, did not pay any attention to all these tricks and did not use his right to warn the players with yellow cards.

But "Dinamo" still could gain its victory. It was the 90th minute when Noiok made a long hand through to tall Ivanou, our forward made pass with his head to Bykau and Artsiom made an accurate headshot - 1:0!

"Gooooooooool"! Another victory at the very last minutes of the match by Dinamo!

After this matchday a two-week pause comes to our championship. "Dinamo" will play its next match only on June 13 in Brest.

Video review of the match