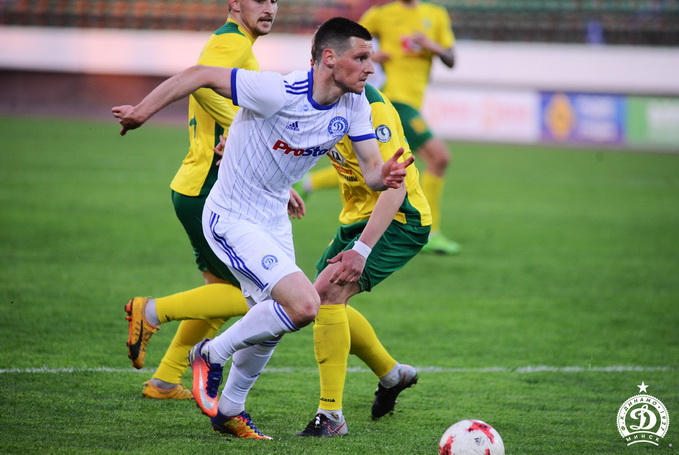 The game was completely under our control, we earned a deserved victory. Dinamo gains three points in Hrodna.

Hrodna lived with the expectation of this match! In the morning on the day of the match all city buses were decorated with the flags of FC "Neman". All previous week in the city cinemas houses were made the announcements about the match before each show. The fan zone opened long before the beginning of the match, at 16:00. A mini-tournament "Father and Son" was held, were all visitors could take part! Not surprisingly, an hour before the match, there were already a lot of paople at the stadium!

The desire to win felt in the hosts team: Yanush and Yablonski created a moment, which will then be remembered for a long time by journalists and host fans: "What if Yablonski would have scored ..."

"Dinamo" did not pay attention to all these reflections and was fulfilling its own tasks, not so creatively  but very effectively. And Dinamo fans liked this approach.
In fact, the first scoring moment at the goals of "Neman" was successful: the fifth score assist in the season was made by Uros Nikolic. And Uladzimir Khvasshchynski scored. If we talk about the numbers, it's worth remembering that this match was the 215th by Uladzimir in the championships of Belarus and he scored the fourth time in a row in away matches of "Dinamo".

After the goal scored, the threads of the game finally passed into the hands of Dinamo. "Neman", tried but failed to create any dangerous moment at Harbunou goals.

"Dinamo", in its turn, calmly and confidently brought the match to the victory, scoring another goal. A really beautiful goal. A 18 meters powerful struck under the crossbar by Nikolic and Zhurau was not able to save.

And after the match there was such a beloved, but already almost forgotten ritual - the whole team thanked the Dinamo fan-sector for its support!

The next match "Dinamo" will play against Soligorsk "Shakhter". The match will be held on May 6 at 15:30 at "Tractor" stadium. Tickets are already on sale!