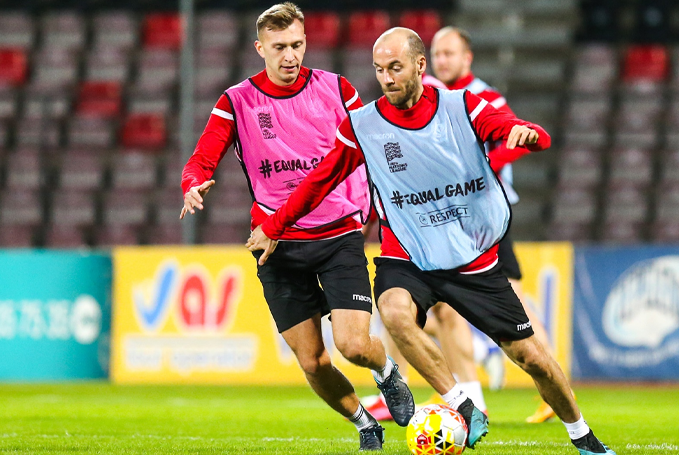 Overview of the performances of our players.

Yesterday the national team of Belarus also finished its performances this year.

A week ago, on November 11, the "White Wings" played a friendly away match against Romania. Unfortunately, the national team suffered a crushing defeat with a score of 3-5. However, despite the disappointing result, there are some positive aspects for our club: both Dinamo players, who were called up to the national team, managed to score in that match. The second goal of Mikhail Markhel's team was scored by Ivan Bakhar and then Uladislau Klimovich managed to score in additional time, having received a pass from Kiryl Piachenin.

Then, on 15 November, the national team played the fifth UEFA Nations League match of the season  2020/2021. The match against the Lithuanian national team became the final home match in the group. Already by the middle of the first half, the hosts scored two quick goals by Yauheni Yablonski and Max Ebong. Ivan Bakhar entered the field on the 72nd minute, replacing Vitali Lisakovich, Uladislau Klimovich entered the field on the 82nd minute.

The final match was against the national team of Albania. The defeat of the "White Wings" with a score of 2-3 allowed the opponents to take the first line in the group and move up to the "B" league. Ulad Klimovich came on as a substitute in the 86th minute, while Ivan Bakhar remained on the bench. Thus, the national team of Belarus finished the UEFA Nations League of the season 2020/2021 on the second line of the group with 10 points. Next year, our national team will play in the qualifying matches for the  FIFA World Cup 2022, the draw will take place in early December.